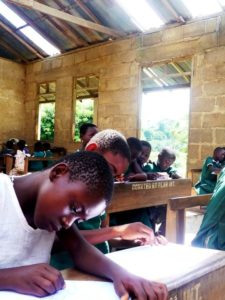 Kwaman is a town near Bawjuase in the Awutu Senyah district in the Central region.  The population of the town is around 5,000. Most of the people in this village are farmers growing pineapples and cassava. It is a very quiet town with electricity and a borehole.  The only school in the area is the Kwaman Catholic Primary School. The school has a population of around 150 pupils (from the nursery level to primary level).

The school block has being in existence for over twenty years and it has never been completed or renovated since it was built. It has six classrooms. The fifth and sixth classrooms of the block are totally out of use. The school is damage in such a way that, the classrooms cannot be used during sunny

There is a lot to be done in this school. Two new classrooms have to be built, all the roofing sheets have to be replaced, we need to make new stairs, fix the walls (both interior and exterior) and then paint the whole school block.

The plan is to make the school building really safe, so that it will not pose any danger on the lives of the children at the school. This has so far been our biggest project. It took a month to renovate the whole school. We had to cut down cost since funds was inadequate at the initial stage. So a project worth 15,000 cedis dropped to 10,000 cedis. We had to cut down cost by going against the initial plan by not building the two classes and also by condemning the veranda on the back side of the school, so as to bring down the amount of roofing sheet and cement needed. The villagers supported us with sand and water on every Thursday. All the sand used for the renovation was donated by the farm in the village (2k farms).

These are some of the reasons why our budget dropped at the end of the project. A few problems were encountered. Some of the prospective workers and the actual

workers were concentrating on the money rather than the work at hand. This project also created employment for the youth in the village for a month. The renovation was done with stages as listed; roof work, cementing and the painting. It took three weeks to bring all cement work to an end and one week for both the roof work and painting.